A Different Kind of Happy Hour

A few weeks ago, I had the opportunity to participate in Kelton’s team ride at Cycle for Survival – an indoor cycling event organized by the non-profit Cycle for Survival, Equinox gyms and Memorial Sloan Kettering - to raise money for rare cancer research at the hospital. A Dartmouth College undergraduate interning at Kelton for the winter quarter, I accompanied a crew of Keltonites for the ride. For those of you who are unaware, Since its inception in 2007, Cycle for Survival has raised over $51.2 million for rare cancer research and has become a true national movement. 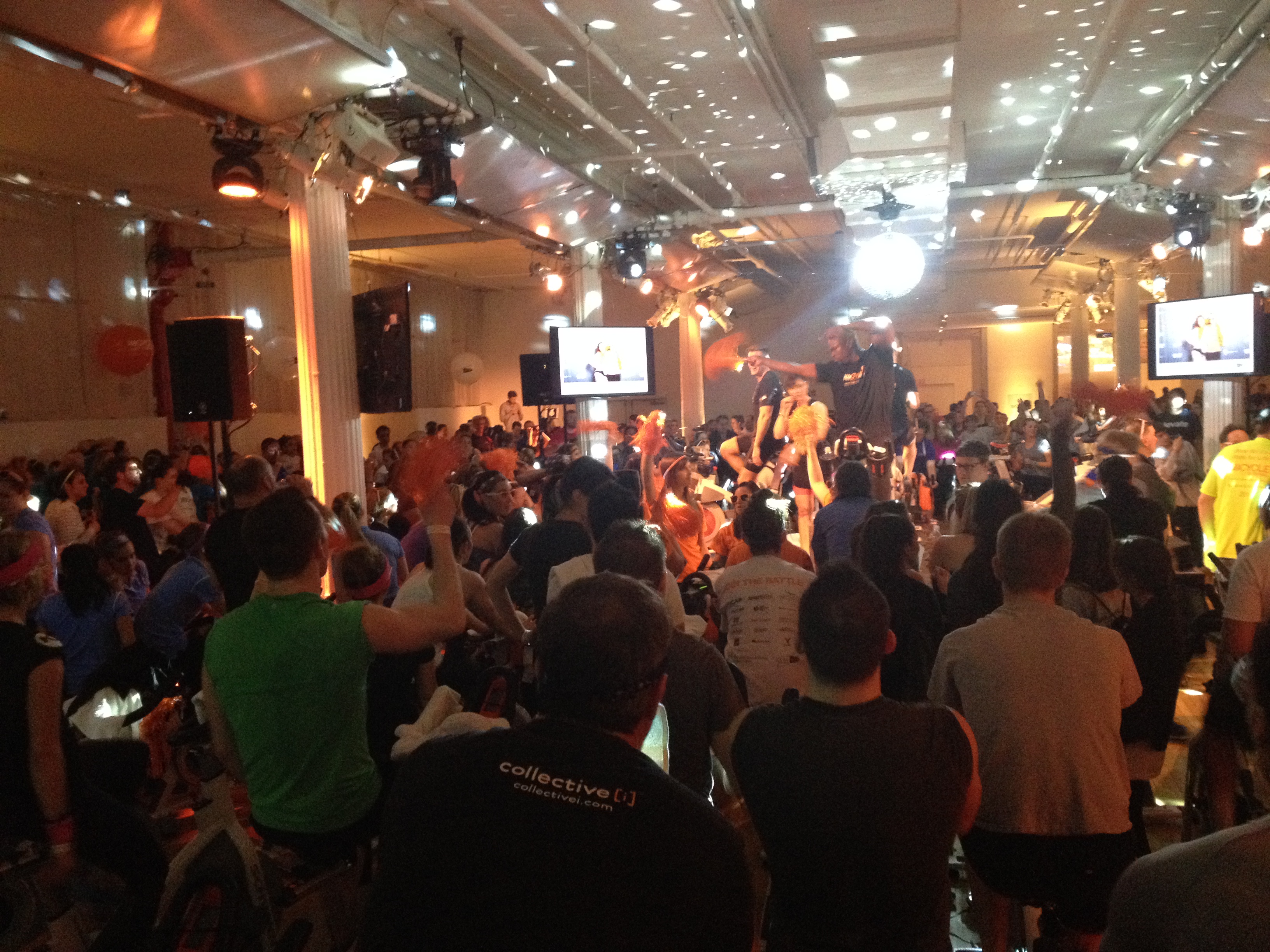 A few weeks ago,  I had the opportunity to participate in Kelton’s team ride at Cycle for Survival – an indoor cycling event organized by the non-profit Cycle for Survival, Equinox gyms and Memorial Sloan Kettering – to raise money for rare cancer research at the hospital. A Dartmouth College undergraduate interning at Kelton for the winter quarter, I accompanied a crew of Keltonites for the ride. For those of  you who are unaware, Since its inception in 2007, Cycle for Survival has raised over $51.2 million for rare cancer research and has become a true  national movement.

After work on Friday, we swapped business casual for sporty chic and headed to event location in New York’s Flatiron district. After signing in and collecting my #CycleforSurvival sweatband, wristband, gym bag and t-shirt (featuring the logos of the non-profit’s corporate sponsors), I accompanied Rachel, a colleague, in the hunt for Kelton’s very own burnt-orange bike: #250. As the first rider, I adjusted #250’s seat and handlebars to match up with my height. I elevated myself onto Kelton’s bike, having authoritatively, calmly and competently adjusted its measurements!  I thanked Soul Cycle for teaching me how to correctly manipulate a mobile bike because spinning is still a relatively foreign concept in Europe. And Cycle for Survival’s unique integration of fitness, philanthropy, philosophy – in the form of inspirational speeches and cheers – and fun is unparalleled across the pond.

Aware that the lights had dimmed, I surveyed the room and felt electrified by the energy, adrenaline and positive vibes that pervaded the room. Brits are synonymous, around the world, with understatement. Despite violating every cultural norm, I blurted out “this is awesome!” Rachel grinned and stood by, loyally, supporting me proudly wearing her Kelton sweatband. A Lance Armstrong look-alike stretched, expertly, on bike #248 in front of me. His muscles bulged out of his recently acquired #CycleforSurvival t-shirt. Not easily intimidated, I stood up on my bike – feet securely fastened – and attempted to recreate one of the ‘yoga on a stationary bike’ moves I had learned at my first Soul-Cycle class.

The DJ – raging, silently, in a booth in the corner – cranked up the volume, and Michaelangelo’s David’s twenty-first century living counterparts – clad in their Equinox apparel – whooped. A whirring noise filled the room – the ride had begun. I pedaled, trying to remember, as Soul Cycle instructors frequently assert, to ‘engage my abs and invite them to the party.’ I looked to my left. The woman next to me was perfectly in sync with the beat: her superb coordination, intense focus and elegant dance moves on her bike, indicated to me that she was a spinner. As a runner – in foreign cycling territory – I was determined to improve my spinning technique so I rotated my head to subtly further analyze her expertly cultivated technique. Despite some minor technical difficulties, I triumphed and found rhythm. I twisted my head back to focus on the Equinox instructor, simultaneously giving myself an indulgent mental congratulatory high-five. Centimeters from #250 a gaggle of girls huddled – my neighboring rider – their friend – as she struggled to maintain her over-zealous start pace. This encapsulates #CycleforSurvival’s magic. All riders join together in honor of a noble cause. It doesn’t matter if, like me, you turn a shade of Kelton red as the clock ticks, the beat quickens and the resistance increases. It doesn’t matter if you simply sit on the bike from sheer exhaustion. And hey, if you are the Lance Armstrong look-alike and rock out for the four fifty-minute sessions with only a sip of Smart-Water in between each session, then rock on! #CycleforSurvival is a truly wonderful cause to rally behind.

Reflection aside, I psyched myself back into focus, chugged a sip of water to rehydrate. The Equinox expert seated on a bike three rows in front of me at the center of the room – encouraged us to rise out of our saddles for a sprint. As I did, I heard a whoop. “Go Sophia!” I whipped my head around to find Ester shouting words of encouragement into my right ear while simultaneously jumping up and down, waving bright orange – coordinated to match Cycle for Survival’s orange logo – pom-poms and yelling unintelligible words of encouragement. I had my very own cheer squad. R n B transitioned to classic rock that blurred to 80s. Song after song, we rode on. Wheels whirled, legs slowed and riders began to hoot and yell as endorphins kicked in. Inspired by my Kelton cheer squad and the riders around me who continued to ride through the sweat and increased resistance – many of them cancer survivors or people like myself who have had loved ones effected by cancer –, I raised my towel into the air and swirled it around. I couldn’t muster a whoop. Maximizing my oxygen intake, coordinating my turns in rhythm with the beat and ‘engaging my core’ re-defined the ‘task’ in multi-task. Energy conservation proved critical at this point in the ride. Instead, the towel-whirl was a tactical and practical reflex action: a display of spontaneous enthusiasm. My enthusiastic and energetic public towel whirling was – culturally and personally – uncharacteristic. However, I was unable to suppress my joy. Excessive endorphins raged through my body. My ‘raise-my-arm-to-whirl-my-towel-above-my-head-instead-of-wipe-my-forehead’ was purely a reflex action.

As my session came to an end Rachel – still decked out in her Cycle for Survival shades and a Kelton sweatband– high-fived me as I tried, but failed, to elegantly dismount from the bike. Allison – Rachel’s personal cheerleader – beamed at me as I squeezed past in search of a dry towel and spot to stretch. As I navigated my way through the bodies and bikes I stumbled into Esther. She high-fived me and smartly provided me with exactly what I needed: a bottle of cold water. Despite my determined attempts to gulp in as much oxygen as possible, I couldn’t stop grinning. I blurted out “wow”. Cycle for Survival was awesome – in every sense of the word. Happy Friday, indeed.