Serial & The Power of Storytelling

If the names Sarah Koenig and Adnan Syed mean anything to you, chances are you've been as engrossed in the gripping mystery of Serial as we have. The runaway hit podcast from the creators of This American Life refreshes the otherwise forgotten 1999 murder case of Hae Min Lee - bringing the trial’s debated details, unlucky mishaps, and glaring inconsistencies to life. Beyond simply rehashing ‘the facts,' Koenig sparks questions. As the 12 episodes unfolded, we found ourselves asking, time and time again: What really happened in those 21 minutes? Why the inconsistencies? What was the motive? Did he really kill her? 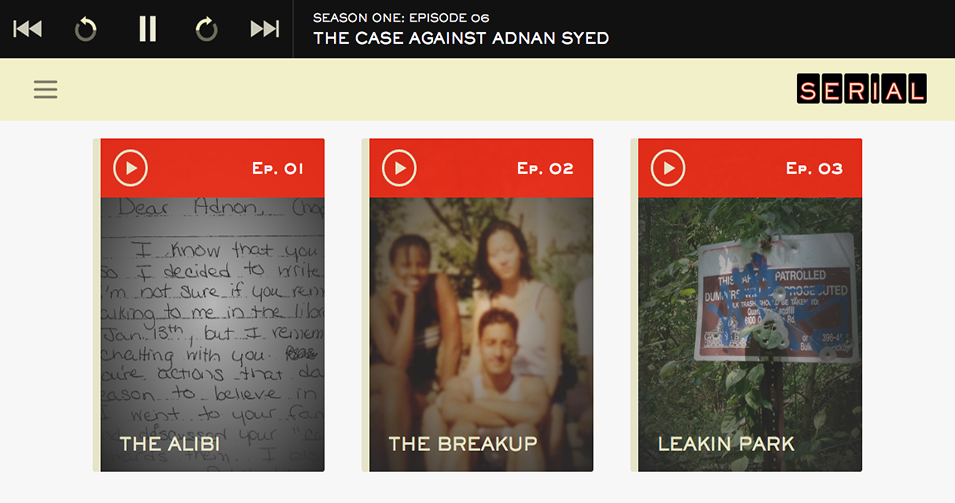 If the names Sarah Koenig and Adnan Syed mean anything to you, chances are you’ve been as engrossed in the gripping mystery of Serial as we have.

The runaway hit podcast from the creators of This American Life refreshes the otherwise forgotten 1999 murder case of Hae Min Lee – bringing the trial’s debated details, unlucky mishaps, and glaring inconsistencies to life. Beyond simply rehashing ‘the facts,’ Koenig sparks questions. As the 12 episodes unfolded, we found ourselves asking, time and time again: What really happened in those 21 minutes? Why the inconsistencies? What was the motive? Did he really kill her?

But in all of this, there’s one question that we at Kelton have been pondering above all others: why do we care?

Is it the nice-guy charisma of Adnan, and our desire to help vindicate him? Is it the intrinsically dramatic (and perhaps bit salacious) story of murder involving young lovers? Is it the potential promise of vindicating a young man through the discovery of ground-breaking evidence that was somehow overlooked? Is it Sarah Koenig’s sheer charisma and amusing way of saying “Um? I don’t know? Right? Why? Okay?”

To help understand the power of Serial, we looked to our 5 Principles of Storymaking, our framework for helping our clients tell their story…

1. Let the hypotheses guide you

In pursuit of the truth, Koenig blazes through her investigation following hypothesis after hypothesis – some eventually negated, some leading down alternate paths, and some having seemingly concrete confirmation.

These hypotheses take the front seat as Koenig scours Adnan’s network of friends and family, searching for some concealed revelation into his “true” personality, or takes a timed drive from Woodlawn High to the now-notorious Best Buy.

Sarah Koenig doesn’t just allow us our opinions – she actively crowdsources the story and invites us into the process. As fans, we’re allowed to ponder: ‘Could this “well-spoken” teenage boy who “seems too nice to have done this,” really commit murder? Is “snapping” an inherent, psychological tick that any human is capable of?’  [Here are some more “Crazy and not-so-crazy” theories to chase after].

2. Put humans at the center – the truth is in their stories

Koenig kicks off the entire Serial series with interviews of people completely unrelated to the case at large – random, ‘normal’ people like you and me. This deliberately introduces a relatable human element; asking the hypothetical question, “Can you remember that day?” makes the point that memories, even those tied to something as traumatic as murder, are subjective.

Throughout her story, Koenig adopts the role as a normal person who happens to be at the epicenter of Adnan’s complicated story. With a sea of perspectives and ‘facts’ around her, Koenig acts simply as an emcee tying it all together. She brings the characters to life, enabling us to empathize with all of the characters to some degree. She introduces the idea that this could be us – we have all lived a double life to some degree, and certain tendencies of this “maybe-killer” are not far off from our own.

Furthermore, she lets her own human imperfection come to the surface; her frustrations around not knowing often come into play, and she adamantly declares Serial as not just another true-crime piece, but an investigation into ‘truth’ that reflects larger, more human issues at play.

Almost immediately, Koenig plants that initial, thought-provoking seed of Adnan’s story, framing it up at the start of the season. There is a deliberate, crystal-clear establishment of the case and problem, which is then followed by an appendix for how we know what we know.

As the episodes go on, she gives us further intel as to how she knows what she knows. Facts are laid out and scenes are set, and slowly, the gaps in our knowledge are revealed. At no point throughout the series did Koenig dump everything she knew on us, but, by that same token, we never felt ill-informed. Her careful curation of what information to tell and when to tell it (often prefaced by “okay, there’s something I haven’t been telling you”) implements a strategic cadence for the story, allowing us to wrap our heads around it in a way that makes sense.

Koenig’s story isn’t a straight line from start to finish. Throughout the entire iterative, participatory storytelling experience she constantly adjusts to new information and contexts. From jumping between suspicions of innocent to suspicions of guilt, to altogether confusion, the reality of tomorrow is constantly changing for all parties involved. Together, we slowly come to understand what we know, what we think we know, and where we lack the slightest clue.

As the story unfolded, people came out of the woodwork to contribute their perspectives, accounts of important events change over time, and even hard evidence such as DNA, originally suppressed, suddenly becomes relevant, with the power to have major implications in the case. [Follow this link to avoid spoilers].

5. Know your audience and platform

Koenig may have nailed this last point more than any other; she is well aware of her audiences eagerness to pull back the curtain and experience an interactive walk-through of the journalistic process. With its bite-sized, binge-able, and interactive nature, Serial infuses the classic radio narratives with modern modes of communication – sharing, commenting, and participating.

Her way of storytelling hinges on her tone just as much as it does on content – alternating seamlessly between narrative and conversational, using music to play up crucial moments, and utilizing end-of-episode cliffhangers that leave listeners wanting more. Her colloquialisms and cultural references, with the occasional joke thrown in, make her story accessible to anyone willing to give Koenig their time.

The tremendous success of Serial speaks to Koenig’s effectiveness as a storyteller. We care because, ultimately, this Serial whirlwind is more than just a great story – it’s a story exceptionally well-told.